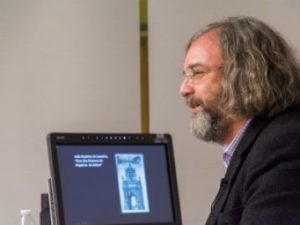 Claude B. Stuczynski is an Associate Professor at the Department of General History (Bar-Ilan University), three times fellow at The Herbert D. Katz Center for Advanced Judaic Studies at the University of Pennsylvania, and past board member of the Center for the Study of Conversions and Interreligious Encounters (CSOC) at Ben-Gurion University. Having written a number of Contributions in various languages, his two main fields of research are: The Portuguese Converso phenomenon and the first encounters between Europeans and Amerindians, including: early modern racism and anti-Converso antisemitism. He is mainly interested in the relationship between religion and politics in Medieval and Early Modern periods. Actually he prepares a study of the theological-political dimension of the Converso phenomenon (what he calls: “The Marrano Paulinian Moment”).

Among his contributions are the following: The New Christians in Portugal in the XXth Century (Jerusalem: The Israeli Historical Society, 2005), contributing in Adriano Prosperi and John Tedeschi's Dizionario Storico dell'Inquisizione (Pisa: Scuola Normale Superiore di Pisa, 2010). He is co-editor with David Graizbord of a special issue of the Journal “Jewish History” dedicated to Early Modern Portuguese New Christian Identities (2011); edited a special number of the Journal of Levantine Studies vol. 6 (2016), on the Political Dimensions of the Converso Phenomenon; edited with Bruno Feitler, Portuguese, Jews, New Christians and New Jews: Roberto Bachmann Jubilee Volume, Leiden: Brill, 2018; and with Michael Heyd & Avriel Bar-Levav (eds.), Paths to Modernity: A Tribute to Yosef Kaplan, Jerusalem: Zalman Shazar Center, 2019; as guest editor of a special number of the Cadernos de Estudos Sefarditas n. 20 (2019) on Late Medieval and Early Modern Judeo-Christianity; as author and guest  editor a special number of the Journal of Jesuit Studies on Jesuits and Conversos (2021) and is preparing a book on Converso Apologetics.