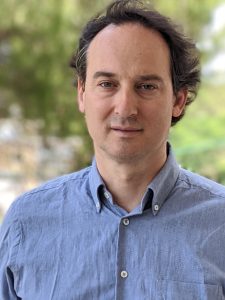 Born and raised in Paris in a post-68 Jewish family, Dr. Cedric Cohen Skalli had studied and worked in academic institutions in several countries, including France, Germany, Israel, Spain, Portugal, Italy and the United States. Dr. Cohen Skalli's first specialization was modern German philosophy (from Kant to Heidegger), especially its interpretation at the hands of French philosophers such as Levinas and Derrida (his esteemed professor). This initial focus continues to constitute the intellectual background of his research and he continues to actively study and translate texts in the field of German speaking thought – focusing primarily on the German-Jewish tradition and its broader political and theological significance as well as the history and philosophy of translation. Dr. Cohen Skalli was recently appointed director of the Bucerius Institute for the Research of Contemporary German History and Society at the University of Haifa. During his Ph.D. studies (1998-2004), he studied the relationship of Jewish thinkers to Renaissance Humanism – focusing specifically on the work of Don Isaac Abravanel (1437-1508). After completing my dissertation, Dr. Cohen Skalli wrote three books and several articles on various aspects of Jewish thought and literature during the Renaissance. His intellectual biography of Isaac Abravanel was published in the prestigious “the great men of the Jewish people” series of the Zalman Shazar Center and recently translated and augmented for The Tauber Institute Series For Study of European Jewry (Brandeis University Press). Since 2010, he has lectured on early modern and modern Jewish Philosophy at the University of Haifa.